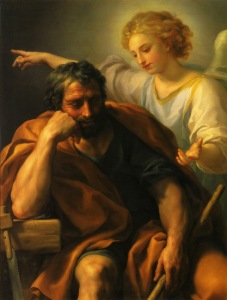 As part of my 25 for 25 (25 devotionals leading up to 25 December), here is Day # 21: We’re looking at famous characters from the birth of Christ. Yesterday we looked at Mary and today we’re looking at Joseph. Matthew 1:18-19 tells us what kind of man and predicament he was in:

“Now the birth of Jesus Christ was as follows: After His mother Mary was betrothed to Joseph, before they came together, she was found with child of the Holy Spirit. Then Joseph her husband, being a just man, and not wanting to make her a public example, was minded to put her away secretly.”

When Joseph found out Mary was pregnant he assumed what had happened in every case of pregnancy before and after this one case: that she had sex. But only God could work a miracle like this since He was the one that defined procreation. This was also the only way for Jesus to be both fully God and fully Man. So, God sent one of His messengers to explain (the attached picture speaks volumes!). Before he could make a mistake the angels said,

“But while he thought about these things, behold, an angel of the Lord appeared to him in a dream, saying, ‘Joseph, son of David, do not be afraid to take to you Mary your wife, for that which is conceived in her is of the Holy Spirit. And she will bring forth a Son, and you shall call His name Jesus, for He will save His people from their sins.’” (vv. 20-21)

What an incredible thing for Joseph to hear that Mary had not be unfaithful to him but instead had been divinely gifted with a baby. Take a minute and think about how Joseph felt hearing that news. Now consider how he felt when he found out that he was part of God’s incredible plan to bring the Savior of humanity into the world! He never expected to hear Mary was made pregnant by the Holy Spirit but even more surprising was that the Messiah was finally coming to earth! Thank you, Jesus, for You have “saved Your people from their sins.”!

For more on what the main characters actually said, see this article.